Dealing with those harder-to-compost items 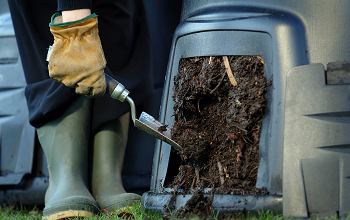 Garden waste collections may be easy and convenient, but Judith Conroy of Garden Organic asks, could we be composting more?

Making compost is one of the great organic gardening pleasures. Few experiences match delving into a heap to discover the black, crumbly goodness that has formed. It’s how we feed our soil and return vital organic matter to it but not everything rots down so easily, and it can be tempting to dispose of trickier items in your garden waste collections or at your local Recycling & Household Waste Site.

These collections do save precious nutrients and organic matter from going to landfill, turning it into useful compost, but it still has to be transported, with further energy expended in its processing and redistribution.

I used to send off perennial weed roots and spiky prunings in this way but came to the conclusion that I was perfectly capable of recycling everything within the boundaries of my garden and haven’t looked back. Here are my tips for dealing with the usual offenders.

Weeds with tough, perennial roots such as bindweed, couch grass and dock can be drowned by immersing them in a bucket of water for a few weeks; use a brick to weigh them down and ensure that they stay fully submerged. Once the roots have started to decay, they can be added to the compost heap and the foul-smelling but nutrient rich liquid can be used as a feed for container plants.

Roots can also be dried out by leaving them to “bake” in the sun (I leave mine on an old piece of corrugated metal that gets extra hot) before being composted. Before drying, weed roots can be tapped with a hammer to crush their structure, which can be quite a therapeutic activity!

If you have a large number of perennial weeds with tough roots you may want to consider making a compost heap specifically for them. It may take a while but all roots rot in the end.

Annual weeds have a habit of running to flower and seed unnoticed, often earning them a place in the green waste bin rather than the compost heap. If you don’t catch them before flowering, temperatures within a hot compost heap are normally high enough t to kill annual weed seeds, or they can be drowned along with perennial weeds.

Even gardens with just a few trees and shrubs can generate surprising amounts of woody material, but this needn’t just be considered something to get rid of. A lot of prunings are perfect to reuse as pea-sticks or other plant supports; I find the branching shape of lilac stems makes them ideal for propping up perennial plants that flop onto paths.

Less useful pieces can go into creating twig or log piles, providing habitat for beetles, centipedes, spiders, toads and countless other wildlife as the prunings slowly rot down. Log piles can be vertical or horizontal and can make interesting garden features. I give spiky prunings their own pile so they can have longer to break down and so I know to take extra care when handling them.

For gardens that produce a lot of woody material or tough evergreen leaves, consider buying an electric shredder or the possibility of sharing one between a group of friend or neighbours. Chipped or shredded wood can be used to make paths or allowed to rot down in its own pile. It may take 18 months or two years or more to mature but will eventually turn into a black, earthy mass that can be used to improve soil or as growing media. Don’t use freshly chipped wood to mulch around plants as the bacteria responsible for breaking down woody material will also strip nitrogen from the soil in the process.

Softer prunings from the current or previous year’s growth can normally be added to a regular compost heap. As most spring and summer-flowering shrubs are best pruned after flowering, they will be in leaf so the nitrogen in them will help any thicker, carbon-rich material to decompose. Soft prunings can also be left to rot down under hedges and shrubs, where they will act as mulch, breaking down to feed the plant, suppress weeds and prevent moisture loss.

Burning may be useful for disposing of diseased material but is best avoided and was opposed by Garden Organic founder Lawrence Hills. (Also, be aware of any local restrictions on bonfires.) Yes, you are left with something that can be added to the compost heap but most of the nutrients will have gone up in smoke along with a lot of carbon dioxide that could have been sequestered in the soil.

Some materials take more time and effort, but everything considered to be garden “waste” will eventually rot down and can be given back to the soil. Composting is no longer confined to just one area of my garden; it has branched out into other spaces and has ceased to be just about the end result. Log and twig piles nestle under my plum and apple trees where I let the grass grow long, and birds come to visit the mouldering piles, picking through them for juicy morsels.

It can be hard to compost everything, especially where space is tight and there is certainly a place for garden waste collections, but every bin or bagful kept within the garden also keeps the benefits there.